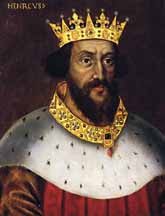 Henry I (1068 – December 1, 1135) was the fourth and youngest son of William the Conqueror and reigned as King of England from 1100 to 1135. He was also known by the nicknames “Beauclerc” and “Lion of Justice”. Henry was born sometime between May 1068 and May 1069, in England, possibly Selby in Yorkshire and was probably the first Norman king to be fluent in English.He quarreled with his elder brothers, William II of England and Robert II, duke of Normandy, and attempted with little success to establish a territorial base for himself on the Continent.

On the sudden mysterious death of William in the New Forest, in 1100, Henry, who was hunting with him, immediately seized the crown and the public treasures, his elder brother Robert being not yet returned from the crusade.

To strengthen his hold on the affections of his subjects, he issued a charter promising to right injustices inflicted by William and to refrain from unjust demands on the church and the barons. He carried out social and judicial reforms, restoring the laws of King Edward the Confessor. He also recalled Anselm, Archbishop of Canterbury, from exile.

On November 11, 1100, Henry married Edith, daughter of King Malcolm III of Scotland and niece of Edgar Atheling, gained him some popularity with his English (as opposed to Norman) subjects. They had up to four children before her death in 1118. When she married Henry, Edith changed her name to Matilda at Henry’s request for political reasons.

Robert invaded England in 1101, but the brothers reached an agreement by which Robert renounced his claim to the English throne in return for the promise of a pension of 3000 marks and the surrender of Henry’s possessions in Normandy.

In the succeeding years Henry defeated and banished Robert’s leading supporters in England. The most important of these was the house of Montgomery (Belleme). Robert de Belleme, Earl of Shrewsbury, whose chief strongholds were in the Welsh Marches, was an exceptionally sadistic man and not popular with the English people. Although he lost several castles in the process, Henry successfully expelled Robert de Belleme with enthusiastic support in 1102.

Henry holds the record for the largest number of acknowledged illegitimate children born to any English king, with a provisional total of twenty-five. These are:

Henry invaded Normandy in 1105, and took Caen, Bayeux, and several other places. He completed the conquest in the following year by the defeat and capture of Robert at the battle of Tenchebrai and became duke of Normandy. Robert was imprisoned at Cardiff until his death in 1134.

In the meantime Henry had become involved in a quarrel with Anselm over the lay investiture of bishops and abbots. In a compromise settlement (1107) the king gave up investiture but retained the right to receive homage from the prelates.

In 1109 the Princess Matilda (Maud) was betrothed to the Emperor Henry V., but in consequence of her youth, the marriage was deferred for several years.

Henry’s reign continued to be troubled by uprisings in Normandy centering about Robert’s son and encouraged by Louis VI of France, who was almost constantly at war with Henry.

In 1118 he lost his Queen, Maud, and two years later his only legitimate sons, who, with their retinue, perished in the wreck of the White Ship, on November 25, 1120, off the coast of Normandy. It is said that the King was never seen to smile again. One of these sons, Richard, remains extremely obscure and may not have existed at all. The other, William, definitely existed and his death proved a disaster for England.

On January 29, 1121, he married Adeliza, daughter of Godfrey, Count of Louvain, but there were no children from this marriage.

The latter years of his reign were marked by his attempts to secure the succession for his daughter Matilda. He died of food poisoning from eating foul lampreys in December, 1135, at St. Denis le Fermont in Normandy having been absent from England nearly two and a half years and was buried at Reading Abbey.

He willed the throne of England to Matilda, sometimes called “Empress Maud”, who was married to Henry V, the Holy Roman Emperor. Although Henry’s barons had already sworn allegiance to her as their queen, the throne was usurped by Henry’s nephew Stephen. There then followed a period of civil war. Matilda married Geoffrey Plantagenet of Anjou, who took control of Normandy. The duchy was therefore separated from England once again. A compromise was eventually reached in 1153 whereby the son of Matilda and Geoffrey would be heir to the English crown, while Stephen’s son would inherit his baronial lands. All this meant that in 1154 Henry II would ascend to the throne as the first undisputed King in over 100 years

Henry’s reign in England was one of order and progress. An energetic, decisive and occasionally cruel ruler, Henry centralised the administration of England and Normandy in the royal court, using ‘viceroys’ in Normandy and a group of advisers in England to act on his behalf when he was absent across the Channel. Henry successfully sought to increase royal revenues, as shown by the official records of his exchequer (the Pipe Roll of 1130, the first exchequer account to survive).